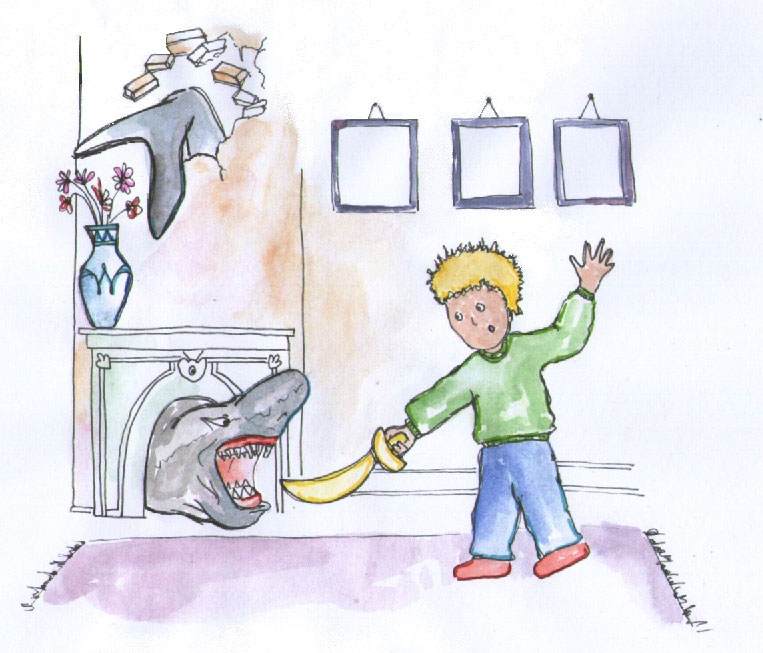 I open the door quietly. There’s a feeling of guilt inside the house as thick as fog. Something terrible has happened. I call out: “George, I’m home! It’s me, Charlie. Where are you?”

I hear a noise from the sitting room. I walk in and gasp at what I see. George, my baby brother, is standing by the fireplace, his little mouth open in horror. At his feet is a shattered vase. Water and flowers are everywhere. It’s Rosemary’s favourite vase, passed down from her grandmother, and no one’s allowed to touch it. If only I hadn’t got detention, I would have got home in time and I could’ve kept George out of trouble.

I’m not surprised when he launches into a great elaborate story about how it was nothing to do with him and a shark swam down the chimney and smashed the vase with its tail and then he chopped off its head and fed it to Cuddles. I know, right – ridiculous. I’m not in the mood for excuses and we’re both dead meat if Rosemary gets back and sees this so I say, a bit harshly, “Everything you have just told me is a complete and utter lie. Now, tell me the truth and we both might live.” So George bursts into tears and confesses everything. I interrupt: “OK, OK, I get it. Now, quick, before your mother gets back.” I shove the broken glass and flowers in a bin bag and he mops the water.

I think we’re safe, but then: “Boys, I’m back. Charlie, I am not happy with you. Where on earth have you been? Do you realise it’s your fault I had to leave George on his own?”

I look at George and draw my finger slowly across my throat.

Never Give Up Hope

The War of the Gods